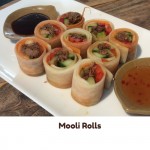 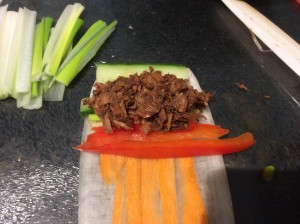 Mooli rolls make a  great low calorie, gluten free lunch. Mooli is a very large radish and is the Indian version of the name. In Japanese it is known as Daikon and in German it is known as Rettiche. Mooli can be used to create a low cal gluten free lunch.  The first time I came across Mooli Rolls was in Marks and Spencer. Their Mooli Rolls are great. Living in Germany I have had to try and recreate them for myself.

It has taken me a few times to try and create a good tasting version of my own and now I have cracked it. The secret of getting the rolls to stick together is to use edible glue. Edible glue can be simply made by mixing 1 part cornflour (Mondamin)  with 2 parts boiling water.

You need to slice thin slices of the Mooli to create the rolls. I used a mandolin to do this as it was able to create wide even thin slices (watch your fingers when using one of these). Alternatively use a cheese slicer or a wide vegetable peeler (The vegetable peeler will give you much thinner smaller slices). Try and make your slices a similar size and thickness

Choose your favourite vegetables to fill the rolls. Use at least four to help create some variety and increase the anti oxidants. In the pictures I used some carrot, spring onions, cucumber and pepper. Other great veggies would be sugar snap peas, beetroot, avocado or red  or white cabbage.

Mooli rolls normally have a meat or fish filling I have had them with:

The fish fillings have the advantage of not needing cooking. Just mix with the sauce of cheese of your choice. For the meat fillings they will need to be already cooked. You can use leftovers from another meal or simply fry up to half a cup of thinly sliced meat in a pan and add some teriyaki marinade once the meat is almost done.

Serve the rolls with your favourite dipping sauces these could be: 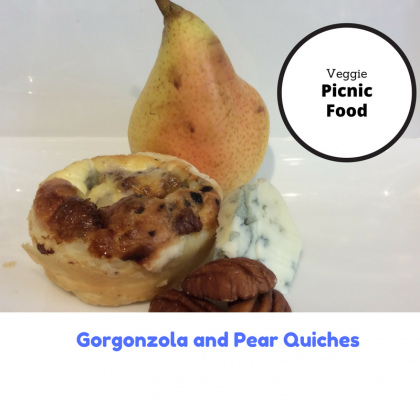 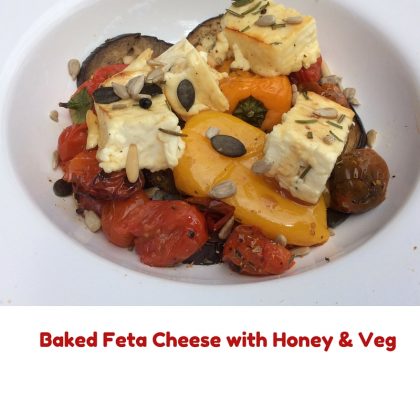