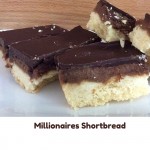 A Chocolate Caramel Biscuit good enough for any Millionaire with a sweet tooth. 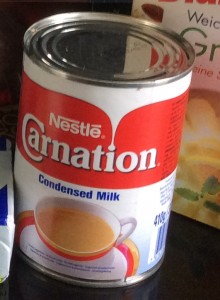 In Germany you have to make your own. This recipe takes about 2 hours to make including cooling but is well worth it. The key to success is to use a sweetened condensed milk. My favourite Japanese Supermarket, Hanaro Markt ,sells Carnation Condensed Milk which is perfect.  A German equivalent is apparently Milch Maedchen sold in a tube. Don’t use Kondensmilch as this is not the same. I have only so far tried the recipe with Carnation and it turned out great.

In this recipe I have included some semolina into the shortbread recipe which helps to give some extra crunch. For the caramel sauce you combine the condensed milk with butter and brown sugar. You can either use dark or light brown sugar. Dark brown sugar gives a more fudge like taste. I will it with light brown sugar next time and get some feedback on which version most people like. For the chocolate topping I used half 70% dark chocolate and half milk chocolate. This worked really well and I would definitely recommend this combination. I have used 200g of chocolate, a lot of other recipes use almost twice as much. I think this is enough chocolate let me know what you think.

The biscuits’ name probably came from the fact that Millionaires Shortbread is very rich. You only need a small square of it.  Once the bars are ready keep them in the fridge. They should last for a few days if you aren’t too greedy.

The shortbread used here contains less sugar than a normal shortbread. If you just want the traditional version check out this traditional  shortbread recipe. For a low GI (low sugar version) you can also try these two healthier recipes Lemon and Chia Seed Shortbread or Low GI Hazelnut Shortbread.