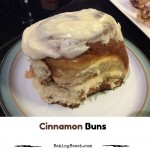 A slightly healthier version of a great American classic Cinnabons.

1. Check your instructions for the yeast. The type I am currently using requires you to activate the yeast for 15 minutes in water with a bit of sugar. Follow the instructions on your packet of yeast.

3. Lightly oil a bowl and cover the dough and leave to rise until it has at least doubled in size, 1 to 2 hours.

5. Roll the dough and prepare the buns using the method in the pictures below. Line the tin with some greaseproof paper.

6. Cook for 15 minutes. Leave the buns to cool in the tin, this lets some of the escaped sugar set on the bottom of the buns.

7. Whilst the buns are cooking prepare the icing. I use a blender to do this as it makes getting the lumps out of the icing sugar easier. Blend the icing sugar first and then add the other ingredients.

7. The buns can be eaten hot or cold. They are at their nicest straight from the oven.

8. Let your taster's top with the amount of icing they would like. I don't ice all of the buns straight away as we normally eat them in two sittings and they can be rewarmed in the oven.

These Cinnamon Buns were inspired by the original Cinnabons.  This version is for a lower sugar and smaller bun, this makes it slightly less naughty but it is still a high calorie treat. The first time we became aware of cinnabons was during the film the Secret Life of Walter Mitty. If you haven’t seen the film its well worth watching, especially for the long board sequence. At one point Walter mets a friend and the friend is eating a Cinnabon. They looked so tasty we all said we must try one. Not living in America, the only way was to attempt to make them. I checked out a few online recipes and gave one of them a try. My first attempt tasted ok but was far to sweet for my taste.

In this version I use an enriched dough recipe. The dough recipe has been adapted from Paul Hollywood’s Hot Cross Bun Recipe. An enriched dough has eggs, milk and sugar which help make a lovely light texture. Compared to some of the other online recipes there is a lot less sugar in the dough. This means you have to wait a little bit longer for the dough to rise, but get a more traditional bun taste and texture. In my version I combine soft light and dark brown sugar with a generous sprinkling of cinnamon to create a great tasting treat.

This recipe is a now a firm family favourite. I always try and make it when we have visitors. Even with the lower sugar version this is still a naughty treat.

How to Roll The Cinnamon Buns

The trickiest thing about this recipe is how to roll the buns. I have tried several ways. The best way I have found is shown below. Rather than using flour to stop the dough sticking oil your rolling board with some vegetable oil, also put a little bit of oil on your rolling pin.Split the dough in half. 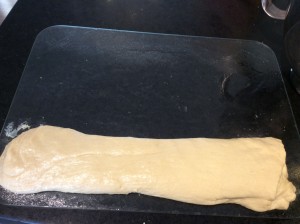 Roll out dough into a thin rectangle, about 3mm thick 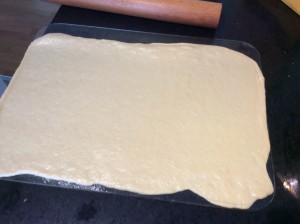 Mix together your sugars 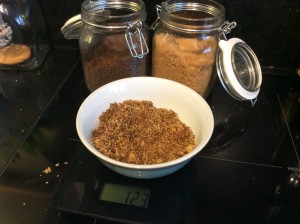 Spread with softened butter and sprinkle with sugar and cinnamon. Pat down the sugar to help it stick to the dough. 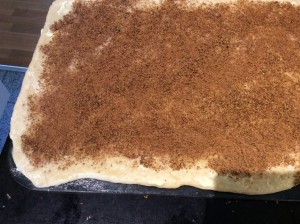 Roll tightly along the long edge 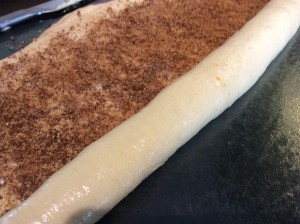 Divide each roll into 6 pieces and place in a lined baking dish, leave a bit of room between then for them to grow 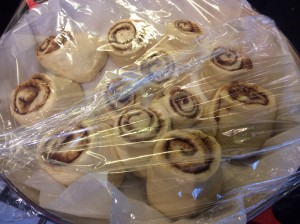 Ready for the oven, your buns should have grown again 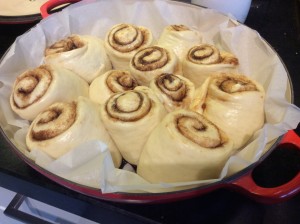 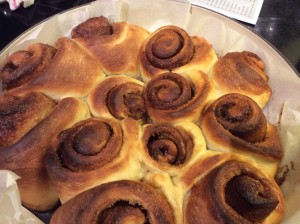 Ice buns when you are ready to eat them 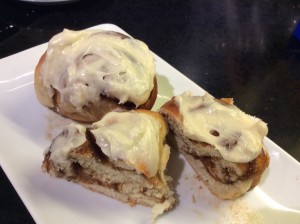