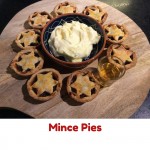 1. Cut the butter into cubes, try not to handle it too much it needs to be as cold as possible. In a food processor add all of the pastry ingredients except for the milk and blend till it is like breadcrumbs.

2. Slowly add the milk to the processor whilst it is still mixing. It should form a ball.

3. Wrap the pastry in cling film and then place in the fridge for 30 minutes.

For Brandy or Whiskey Butter

To fill the pies

Mince pies are a British Classic Christmas treat. Everyone normally starts eating them as soon at it turns December. If you haven’t heard of mince pies don’t be scared, they aren’t made of meat but a combination of dried fruit, Christmas spices and alcohol. This version is a vegetarian one in which I use prosecco instead of suet (animal fat) to create a great tasting filling. The quantities given here make 3 large jars of filling. As long as you sterilise the jars well you would even be able to use the filling  for next years pies if you haven’t eaten too many in one go. If you need to learn how to do this check out my tips on how to sterilise jars.

In the UK all of the major supermarkets compete to have the best mince pies. Living in Germany I have had to learn to make my own pies from scratch. You can’t beat homemade mince pies straight from the oven. They are delicious served with brandy (or in our house Whiskey) butter and/or cream. For the pastry I use a mixture which uses ground almonds and all butter this helps to make a light crumbly texture. It is hard to find soft brown sugar in German supermarkets, Galleria Kaufhof sells it as does most of the Asian Supermarkets. If you can’t find it you can use normal brown sugar instead.

The mince pie dates back to the 13th Century when the crusaders brought back spices to Britain. Originally the pie did contain meat but over the years it has developed into a tasty sweet treat.