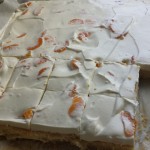 A great German Tray Bake Cake, popular for Birthday Celebrations with colleagues at work. Ingredients have been marked for German and UK ingredients where they differ.

To Make Cake Base

1. Grease and line your baking tray with greaseproof paper

2. In a bowl for the Cake dough. Mix the Sugar, vanilla sugar or vanilla extract and eggs to they are light and fluffy.

3. Weigh out for the flour and mix in the baking powder till it is well combined. Sieve into the bowl.

4. In a jug measure out the oil and Fanta and mix to combine. Add this to the other ingredients in the bowl and mix till they are combined. Don;t overwork the mixture as this can lead to a heavy cake.

6. But the mixture into the baking tray and spread it out till you have an even layer.

7. Bake for 25 minutes. Before removing it from the oven check to see that the middle of the cake springs back when gently touched with your finger. If it doesn't leave to cook for 2 more minutes and try again. Keep checking till it is cooked.

8. Remove cake from the oven and leave it to cool on a wire rack until it is completely cold.

9. Remove the mandarins from their tins and leave them to drain.

10. For the UK ingredients whisk together sour cream, whipping cream and vanilla extract gradually sprinkling in the sugar until you have a thick mixture.

11. Using the German ingredients whisk together the Schmand and Schlagsahne gradually sprinkling in the sahnesteif and vanille zucker.

12. Gradually fold the mandarins into the cream mixture.

13. Once the cake base is completely cold spread the topping mixture evenly over it. Cover with cling film and then put in the fridge to set fully.

14. When you are ready to serve it you can sprinkle it with cinnamon and sugar.

When I started this website and requested Family favourite recipes this was one that my friend Ernesto has given me. A big thank you to Ernesto’s wife for sharing this recipe and the great picture of it. It is not Ernesto’s  favourite, that is Schmand cake that will be coming soon, but it is one of his wife’s and son’s. It sounded very unusual to make a cake with Fanta. But after he showed me the picture I’ve realised I’ve had it a few times. The sour cream topping is the perfect offset to the sweet sponge base. If you don’t like mandarins you can make a plain version or experiment with other fruit.

One of the great traditions in Germany is that on your birthday you bring in cake for all your colleagues. Most people do this or go to one of the great bakers and buy some. Its a very common sight to see people on the tram or train with a whole tray bake.  This Fanta Cake with Sour Cream and Mandarins is one of the most popular. As most of us don’t want a whole tray of the cake I have halved the original recipe. You will need a square cake tin of 23cm. Of course once you know you like it and for a celebration  double the ingredients and make a whole tray. The second picture in the gallery gives examples of the tins you could use.

I have also changed  the ingredients slightly in the English version as some of the common German ingredients are available in the UK. Vanilla sugar is one ingredient here that most cooks use. In the UK it can be replaced with vanilla extract or paste and extra normal sugar. In Germany there also isn’t any whipping cream. The way they make is to take Schlagsahne ( I know it sounds awful to us English) and add a packet of Sahnesteif, cream stiffener, see picture 3 in the gallery. You sprinkle in the powder and then whip the cream.

In Germany most of the cakes you see have a sponge base and are then topped with fruit or dairy. This recipe is a classic example. This means that to get a level base they use much less raising agent than a British recipe normally would. The high levels of liquid in the form of oil and Fanta in this recipe ensure that it still remains moist.

Hope you give it a try. If you do, we would love to hear whether you liked it. 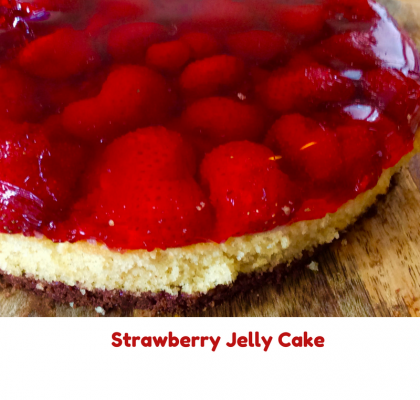